admin
2022 Kia Carnival Minivan Debuts With SUV Styling And Space For Eight
Formerly known as the Sedona, the fourth-generation Kia van may revitalize its category.
Kia is on a tear to rebrand itself as a purveyor of modern, stylish vehicles, both via a new logo and cohesive global naming strategy. We saw the latter with the debuts of the Optima-replacing Kia K5 last year, as well as the larger K8 sedan (don’t call it a Cadenza). However, the first new vehicle to receive the company’s new badge will be the 2022 Kia Carnival minivan, which arrives this year to replace the Sedona.

Adopting a name that Kia has used on its global-market minivans, the 2022 Carnival is targeting crossover shoppers even more intently than its predecessor with bolder styling that might help it steal a few customers who might otherwise find themselves in a two-wheel-drive Honda Pilot or Ford Explorer. Once in the bag, those shoppers should appreciate the van’s long list of standard active safety features, spacious seating for all three rows, and available second-row “lounge” bucket seats that look like they’re cribbed from a luxury coach.
Setting the 2022 Kia Carnival apart from its competitors – the Chrysler Pacifica and Voyager, Honda Odyssey, and Toyota Sienna – are unique styling elements that the company says make the van look taller, wider, and more versatile. The brand’s signature tiger-nose grille is revised slightly, with body-color inserts serving as the upper and lower notches. Meanwhile, LED headlights with zig-zag DRL accents recall the stylish Seltos small crossover, giving the front end an aggressive, cyber-chic appearance.

The hood still slopes downward in that distinctly vanlike way, though its leading edge now meets the grille to eliminate a fussy bodyline. Counteracting any frumpiness is the work of a horizontal accent line that runs between the thin head- and taillights, visually flattening the hood and disguising the sliding door channels along the way (other minivans put the door mechanisms on the lower edge of the rear quarter windows, which looks better).
Black A-, B-, and D-pillars give the roof a floating appearance, but this tired trend is updated with textured brightwork on the cantilevered C-pillar, giving the Carnival distinctive, premium styling. Instead of trimming the entire beltline in that aluminum-look material, it only stretches around the rear quarter and hatch glass. The baubles and thin, downturned LED taillights impart more than a little Lincoln Aviator in the van’s rear styling.

Inside, it’s textbook Kia, with a wide dashboard and lots of horizontal elements. An available digital instrument cluster and infotainment touchscreen, both measuring 12.3 inches, are useful updates over the old Sedona – conventional gauges and an 8.0-inch screen are standard. A broad center console does away with the useful front pass-through found in other vans, but it does add storage and crossover style. Meanwhile, this photo model’s distinctive two-tone colorway brings lots of visual flash, even in the second- and third-row seats. 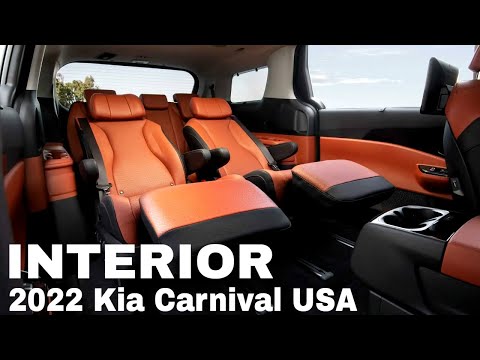 2022 Kia Carnival Minivan Debuts With SUV Styling And Space For Eight Formerly known as the Sedona, the fourth-generation Kia van may revitalize its c...