admin
Concept EV9 represents a next possible iteration for the SUV. Developed on the advanced E-GMP architecture – the Concept EV9 is a high-tech, family-friendly vehicle that is powered by a zero-emissions all-electric powertrain.

It blends a stunning exterior profile with a modern and sleek interior space that is influenced with state-of-the-art tech. The incredible aesthetics of the Concept EV9 – both inside and out – have been carefully honed from Opposites United, Kia’s new design philosophy.

Taking inspiration from the ‘Bold for Nature’ design pillar of Opposites United, the Concept EV9 embodies an adventurous, outgoing and recreational form with its rugged and upright stance. From the outside, such proportions help outline a three-row SUV footprint, signifying a vehicle that is highly capable, practical and ready for action.

From the side, this modernistic angular profile gives the all-electric SUV a simple but distinctive outline that is deeply rooted in the ‘Bold for Nature’ pillar of Opposites United.

A low gravity side body creates maximum and instant impact with the sharp crystalline inspired fender volumes that sit high up on the vehicle. This low side body profiling effect makes the fender volumes of the Concept EV9 pop out, resulting in a strong SUV stance.

Contrasting with its muscular on-road presence, soft and welcoming volumes across the body of the Concept EV9 are offset with sharp and neatly edged elements. Solid rock geometry is expressed through a sophisticated design distribution of mass, while the volume of the soft fuselage cabin has been made to feel welcoming and approachable.

Concept EV9 measures 4,930mm in length, 2,055mm width, 1,790mm height and has a wheelbase of 3,100mm. The concept also combines its stunning SUV form with state-of-the-art engineering. The all-electric SUV delivers driving range of up to 300 miles. It also features next-generation ultra-fast charging technology with a 350-kW charger that allows its advanced battery electric powertrain to replenish energy from 10% to 80% in 20-30 minutes.

Against a wellbeing, wellness and mindfulness backdrop, the Concept EV9 has been carefully crafted to offer the driver and passengers a transformative interior space as the journey experience evolves.

Mirroring the exterior design, the interior of the Concept EV9 has also been greatly influenced by the ‘Bold for Nature’ design pillar of Opposites United.

Inside the all-electric SUV is a design undertaking that integrates the qualities of nature, movement and stillness as part of a scenic, first-class lounge. The panoramic roof, with its sky-gazing views, further adds to the sense of lightness and being in contact with the environment.

An interactive 27-inch ultra-wide display connects the Concept EV9 from the real-world to the virtual one, while serving as the nerve center for all driver and passenger requirements, including media, climate control and comfort functionality features.

This sense of ‘tomorrow’ extends from the visionary interior design and into the steering wheel. The automotive industry today treats the steering wheel like a separate product – a total standalone subsystem; the Concept EV9, however, takes a radically different approach in which the pop-up steering pad is an extension of – and integrated and harmonized within – the interior space. 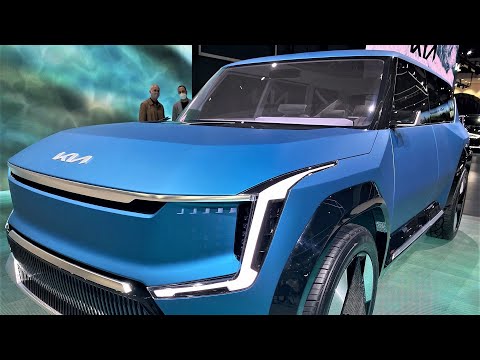 Concept EV9 represents a next possible iteration for the SUV. Developed on the advanced E-GMP architecture – the Concept EV9 is a high-tech, family-fr...